I don’t do well in the heat, to be honest. One of my earliest memories is being hospitalised with second-degree sun burn in St. Tropez when I was a kid, so I’ve kind of avoided the sun ever since. I’m the one wearing factor 50, a sunhat, and sitting in the shade complaining whenever the sun is out so the last week or so has been pretty tough on me.

While others binge-watch YouTube, or Netflix, or surf the web on rainy days, I’m the opposite. As soon as the sun’s out I head indoors, close the blinds, and curl up with a good book or five.

I’m currently reading Emma Gannon’s The Multi-Hyphen Method and I can’t recommend it enough. When I’m out teaching at drama schools or even just hanging with actor friends I’m always trying to persuade them to see themselves as more than solely “actors” – to my mind, the secret of a long career in this industry is to just keep on going; keep surviving. To do that in an profession that cannot guarantee anyone a steady career or income is super tough though, right?

The Multi-Hyphen Method is sort of a fresh look at the old portfolio career idea, one I’ve subscribed to pretty much all my life; actor, teacher, examiner, writer, publican, drag queen, tutor, marketing manager, PA, opera singer to name a few. The Multi-Hyphen Method  recognises that the world of work has changed and that we, the workers, are reinventing the old rules to our own specification. Gannon breaks down her method with informative research pointing to a seismic shift in the way we work, and in how our work defines us. It manages to be informative, funny, inspiring and can, I think, be hugely influential in helping creatives to not only develop a career that really works for them but might also give you a bit of peace of mind along the way.

Over the last five or six years I’ve noticed that “Multi-Hyphenates” are everywhere, but it’s not a new phenomenon, creatives have been multi-hyphenating for as long as I can remember. What Gannon adds to the story, and what gave me a great sense of relief,  is something that is often missing for creatives – permission.

Over the years, almost every actor I’ve spoken to has confided their fear that if they were to try their hand at something else, like, oh I dunno, writing, or YouTubeing, or producing or directing, or stand-up, that somehow it will mean they’re not “a proper actor” – because obviously a “proper” actor acts all the time, right? Well, no, actually. I don’t need to run the employment figures by you, I mean it’s Monday and we’re all depressed enough already, but we all know that being privileged enough to act full-time is the exception and not the norm. So everyone’s already multi-hyphenating. You’re at your temp job, or your bar job, or handing out cheese or magazines, maybe teaching on the weekend, running the odd kids party, cleaning offices – whatever it is you do that pays the bills. The Multi-Hyphen Method can help you see that those jobs aren’t separate from who you are, they are all part and parcel of who you are, and that all those different income streams are just one salary. Just about everyone I know is a already a multi-hyphenate – juggling dozens of different gigs to make ends meet. It’s normal, it’s what we all do. Sure, I’m an agent, but I also have one book and one novel on the go, I’m producing a musical (with another one in development), I teach, I write for a few different publications, I’m a visiting lecturer at St. Mary’s in Twickenham and occasionally I read books for production companies and write reports on whether I think they’d make good TV shows or films.

With just about everyone hustling then, why do we often feel such shame around it? Gannon also looks at this, and how our work, how what we do, defines us as people. It’s no wonder then that actors might feel ashamed to admit that they’re not, actually, doing what it is that they actually do.

“Would I have seen you anything?”

It’s that, isn’t it? And it makes us feel as if we’re lying, and lying to ourselves, which is worse. No wonder we’re on the precipice of a mental health disaster!

Actors also often feel as if they can’t tell anyone about their side-hustle in case “people stop thinking of me as an actor”.  The acting industry is hard, really, really hard, and you’re constantly being told you have to be like, really, really committed to it and focussed on it or you won’t get anywhere. There’s this cultural conditioning that goes on in the industry that says if you’re not absolutely committed all the time then you’re not serious about it. The thing is,when I ask actors who they most admire in the industry their answers usually include a whole range of multi-hyphenates; Michaela Coel, Phoebe Waller-Bridge, Emma Thompson, Kenneth Branagh, Daniel Evans – the list goes on. It’s the same for me, the people I admire the most in this industry are not the ones who do one thing well, it’s those who do a whole range of things. I’m more drawn to the jack-of-all-trades than I am to the master of one.

If you’ve been struggling with the idea of being a ‘multi-hyphenate’, or scared of pursuing your own side-hustle, then I recommend reading The Multi-Hyphen Method and giving yourself permission to be ‘Actor – Writer – Influencer – Charity Director- Artisanal Baker- Mum – Activist – Personal Trainer’ whatever it is you want to be. 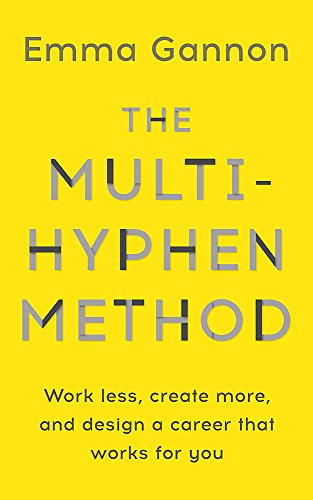 The Multi-Hyphen Method: Work less, create more, and design a career that works for you
By Emma Gannon

What I’ve been reading this week

What I’ve Been Reading This Week

What I’m Reading This Week

You Are A Badass. Or rather, you could be.